Is Lulu Bea My Real Name?

Many people have often wondered if Lulu Bea is my real name, so I thought I’d share the story behind it. No, Lulu Bea is not my birth name, but Lulu is a nickname that I’ve had since childhood. My mother added it onto the end of my first name and, as nicknames often do, it took. It was not a nickname that was used in lieu of my first name though. It wasn’t until I had nieces and nephews that “Lulu” reemerged for them to call me “Aunt Lulu.” Nowadays, some family and friends call me Lulu, but it is mostly a name that is used within my business world.

So why did I choose to use “Lulu” for my work name instead of my real one? Well, the short of the story is this:

Because I had a stalker.

Yep… I’m totally serious. It was not a super scary situation where I felt that my life was threatened. It was more along the lines of “Who is this random guy that is always smiling at me? And why does he keep showing up where I have my grad school classes and outside my apartment building? I’ve never even had a conversation with the guy, yet he won’t stop trying to contact me. This is really, really weird.”

It quite possibly was a case of  misunderstanding where he just wanted to tell me his side of the story, but my parents insisted on my being safe and taking matters to the authorities. So… that’s what I did, and it eventually went to court… twice. He was deported, and since then I’ve tried to keep personal info private to protect my family. Kind of impossible in this day & age, but hey, I try.

When the urge came to start my own business, “Lulu” seemed like the natural choice. I went by “Lulu” alone for a couple of years, until an art show asked me for a surname. I asked why it was needed, and they basically said that they didn’t feel comfortable with me only having a first name. Um… okayyyy… So you just want me to make up a last name???

While slightly annoyed, it was also somewhat exciting to have my pick of any last name. I mulled over various possibilities for a few days, but nothing inspired me. Then I thought about the greatest inspiration of my life –

“Lulu Mimi” didn’t quite flow. “Mimi” was the nickname us grandkids called her. Her real name was Beatrice, and I remembered hearing one of her friends address her as “Bea,” and thus “Lulu Bea” was born.

How was Mimi my inspiration? Well, how was she not?! Check out some of the many amazing things about her:

Mimi passed away in 2011, so she never saw that I chose Bea as my surname… but she knows. She knows.

I feel Mimi around me all the time. I know she is proud of me and of what I’ve accomplished thus far. While writing this post does make me cry, it is only because she was so amazing to know, and remembering her brings me happy tears full of love.

I often think about how inspirational she was to all that knew her… and I wonder if she even knew. When I ponder what my life’s purpose is, and what steps I should take next on my journey, I often think about Mimi and how she just lived her life being herself.

You know… maybe that’s what it’s really all about.

We all aren’t destined to create world change on a grand scale. Living a life of purpose and meaning is not directly correlated to the number of people you know, or the number of “likes” you have on Facebook.

Maybe, just maybe, all you need to do is what makes you happy. Do what interests you. Find what gives you goosebumps. Follow what scares you a little, even if it results in failure. Who knows…through you choosing to live your life to the fullest, daring to get back up every time you stumble, you may very well inspire others you meet along the way… 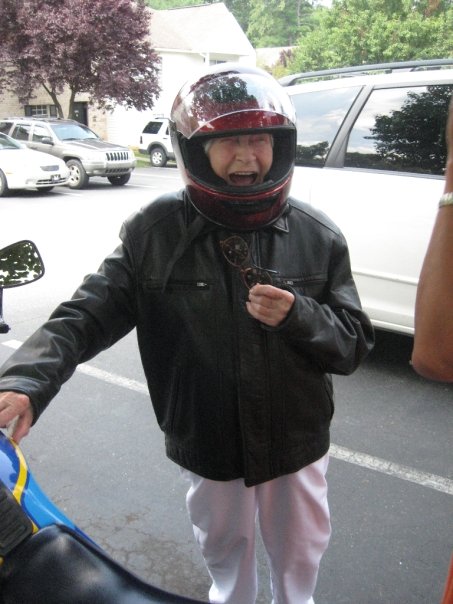